During a recent review of a client's Azure application and part of a Digital Transformation requirement the lights came on for us all after a simple whiteboarding session. Often when technical concepts are being explained, it is difficult to visualise the primary building blocks and interactions of a system at a high level.

After just a few minutes at the whiteboard we were able to quickly confirm our understanding of the existing solution and effectively contribute to a plan of next steps to support the transformation process going forward and detail some business and technical requirements.


Another tool that can really help to take white board sketches to a new level is Sketch2Code which transforms a hand-written user interface design into valid working wire-frame. It is a web based app that captures the whiteboard image and converts it to a usable HTML prototype.

The benefits of this type of approach are great because each and every stakeholder is able to add real value in a short space of time. It is amazing how much initial confidence and validation can be achieved when the whiteboard comes to life.

The coolest part for us has been the Azure integration in that an app service is generated to show the prototype.

Below is the application workflow leveraging Azure services and storage: 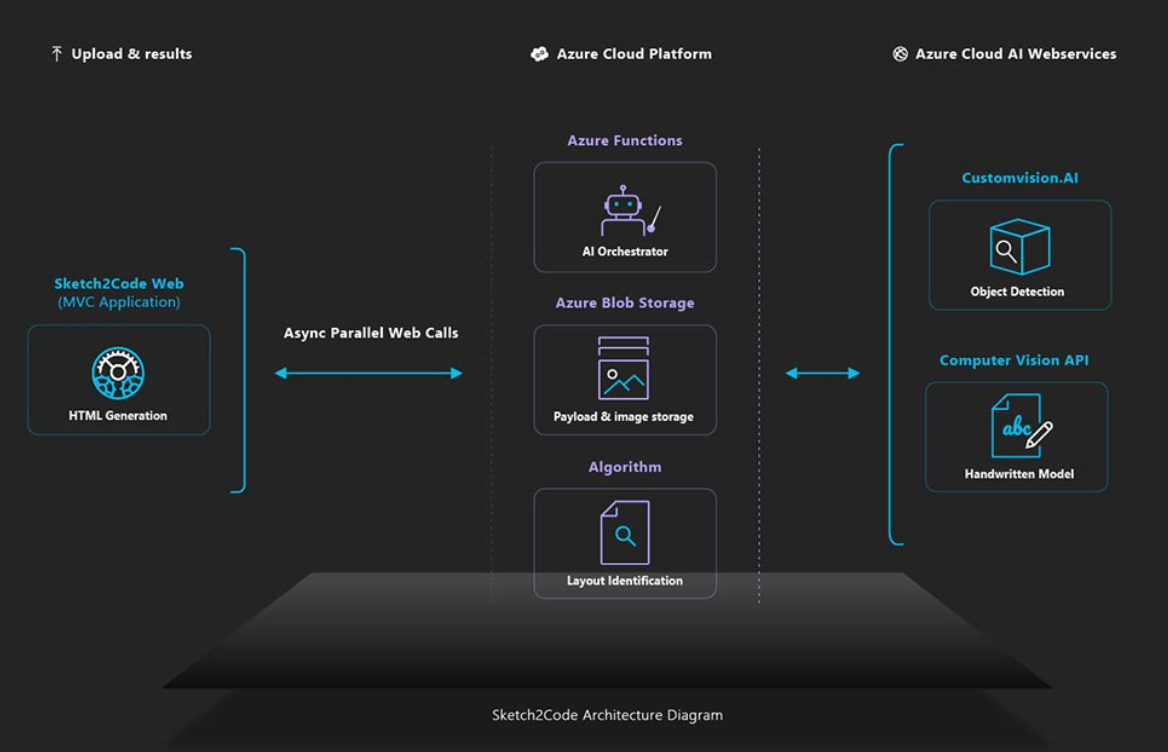 You can find the code on GitHub for this project along with some really interesting use cases for AI.

Posted by Carl Randall at 18:10 No comments:

Managing whether an identity has access to a given service, feature, function, object, or method in Azure DevOps comes down to authorisation. Fortunately, by default, the DevOps permissions are set in such a way to enable you to focus on the job at hand, DevOps. Loosely translated this means 'don't get in my way'. My experience is that the Azure DevOps team have done a good job at this, enabling you to crack on developing, building, testing and releasing without much hindrance. 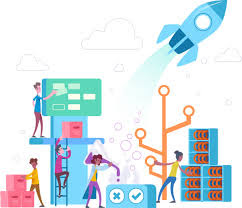 Working with relaxed permissions is great when you are the owner and possibly either a one man band or small team but as soon as we need to consider larger teams, varying roles with approvals and degrees of access, authorisation becomes a real concern.
I was recently involved in a project utilising offshore developers where trust was a concern and a number of specific teams handling specific roles needed to come together to approve a set of pipelines.

This article is a pick of findings and a memory jogger for me of some of the touch points encountered.

This assumes the connection has already been authenticated, more detail on authentication can be found under the references section below.

Authorisation is based on users and groups.

On top of this comes another layer of abstraction that of Azure DevOps security groups. Security groups assign a set of permissions to the members of the group. The members are either individuals or user groups, such as Active Directory, more on that later.

Azure DevOps comes pre-configured with default (built-in) security groups. Some thought has gone into the way different types of users (roles) will interact with Repos, Builds, Releases and much finer granularity but the out of the box groups are ready to be populated with members.
The groups are applied at three levels:
The levels are detailed below along with examples of the default security groups created for you out of the box.

We can ignore Server for this discussion as it is essentially an on prem install and we are focusing on a purely cloud based solution. Links in the references section below provide more info about Azure DevOps Server or Team Foundation Server (TFS).

The default organisational security groups are shown below: 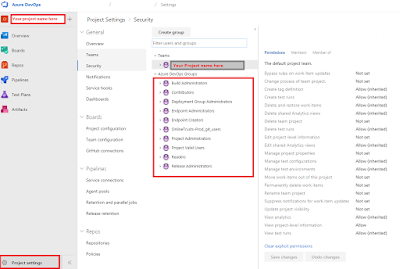 Note* In order to create projects and add users to projects, you need to be added as a project administrator

Essentially, when working in an Azure cloud only model, you are either dealing with an Organisational group or a Project level group.

Note** Avoid changing the permissions of the default groups and instead, create custom security groups

When a scenario develops which requires finer granularity or a subset of another group, creating a custom group is the solution. For example, you may want a specific set of Team Admins that do not require all the project or organisational administrator permissions applied to a default administrator group but just a subset.


Note*** Whether creating a security group at the organisation or project level, the result is the same.

Adding Users and Groups to Azure DevOps can can be achieved via Active Directory (AD), Azure Active Directory (AAD), Individual Microsoft Accounts (MSA) or for on-premises deployments, local Windows users and groups.
Our discussion focuses on a the DevOps portal and Azure only so we can narrow that down further to AAD and MSA.

Using MSA works great for projects with limited users but as soon as you start dealing with teams, AAD is the way to go.

You can add individual users or AAD groups to either the default or custom security groups. When you do so, an entry automatically gets added to the Valid Users group (default) as this is required to connect to a project and is primarily limited to read access, such as view build, project and organisational information.

As a starting point, users that are required to 'get stuff done' will usually require access to the Contributors security group. For those only required to approve and review information, this may not be required.

Members can be individual users or more commonly AAD groups. This will lead to creating AAD groups for the types of roles within the organisation but targeted towards DevOps. Some examples might be 'Developers', 'Business Stakeholders', 'Build Admins' 'Release Admins' and at least one group which may act as a more general group with common permissions shared by other groups. Another tip I can recommend is to find a naming convention for the AAD groups which distinguishes them from other Azure DevOps groups, particularly when attempting to gain insight into who is a member of what further down the road.

Linking your DevOps organisation to AAD is a straight forward process using the link button in the portal, as shown below. 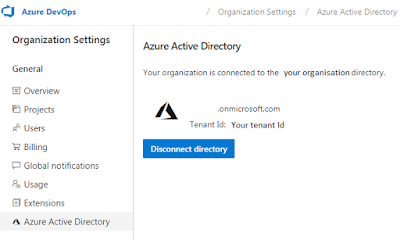 As well as the default groups created, you can also see above a default team has been created with the same name as the project.

Teams can drastically help the organisation of the development work underway. You can create 'feature' teams and add those as members of the Azure security groups. Work items and sprint planning can then be linked to specific teams. For the sake of brevity, we will not be going any deeper with teams in this article but bear in mind you will need to touch on them to group and get an overview of work at a team level.

By default, the default team group and all other teams added to the project are included as members of the Contributors group. So adding new users to a team, automatically inherit Contributor permissions.

Note* In order to create teams and manage users, you need to be added as a project administrator or team administrator.

Each of the default groups comes pre-defined with a set of default permissions.

Permission controls access to specific functional tasks at different levels within the system.

The levels that permissions are applied to are identified below:

Object level permissions are what they say on the tin. But it took me a while for the penny to drop. Each and every 'thing' we create in the portal is mostly defined as an object. For example, a build pipeline, a code branch, a release pipeline, file, folder etc. Each of these objects contain a more granular permission level by accessing the ellipses menu while the object is selected, which loads the familiar permissions dialog.

Object-level permissions can be seen below, highlighting specific permissions applied to a selected build pipeline. 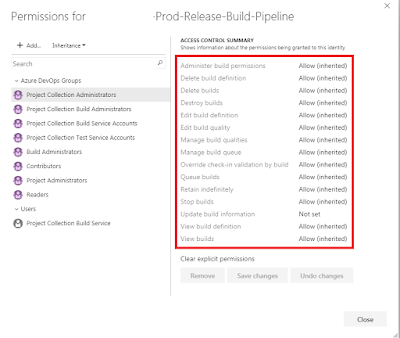 Once again, the same set of security groups determine what permissions are allowed, which as stated previously will cover most scenarios 99% of the time. 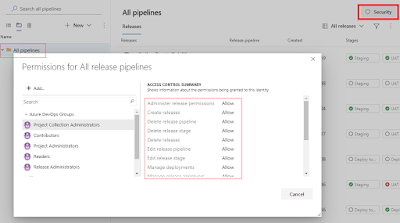 The above highlights that for the area of interest, it is first worth checking whether object-level permissions apply to ensure you are setting the permission at the right level for your requirements. (see scopes below)


At the other end of the spectrum, below highlights the same permissions being applied to a stage within the same release pipeline:

Another example is Git Repos, which also have a set of Object-level permissions, accessed via the project settings action bar.

The above release-pipeline scenario highlights another level, that of scopes. When reading the documentation for a permission, take note of the scope column, which identifies at what scope a permission can be applied i.e project | release | pipeline or project | release | pipeline | stage. This will aid in confirming the level applied is the correct one for your given requirement/s.

Allow or Deny explicitly grants or restricts users from performing specific tasks, and are usually inherited from group membership.

For members of the Project Collection Administrators or Team Foundation Administrators groups, Deny doesn't trump Allow. Permissions assigned to these groups take precedence over any Deny set within any other group to which that member might belong.

Changing permission for a group changes that permission for all users who are members of that group. In other words, depending on the size of the group, you might affect the ability of hundreds of users to do their jobs by changing just one permission. So make sure you understand the impact before you make a change.

One feature of interest in tracking down how, or more precisely where, a permission has been applied is to use the 'Why?' link that is available when hovering over a given permission that is inherited. The trace permission feature gives an insight into where the permission is applied as shown: 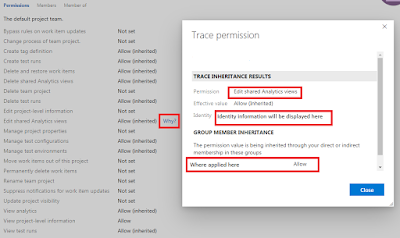 Note* When navigating Groups at the Organisational level, ensure you use double click to move between groups resulting in an updated view of members and permissions. Single select, at the time of writing does not always update the details, which can lead to some confusion.


The most time consuming part of changing permissions in my experience has been finding the correct permission to apply. The reference section contains a handy Permissions lookup guide for Azure DevOps link which is essentially an index for specific permissions, grouped by Organisation | Project | Object | Role | Team

In order to access certain features of the Azure DevOps portal, users also need to be assigned an access level. The ones of interest are currently:

By default, an organisation has 5 Basic licenses and unlimited Stakeholders. A license is assigned to a user by selecting the access level, as shown below. Additional licenses need to be purchased via the Azure Marketplace.

Note* Applying access levels alone does not grant access to the project in the portal. Users still need to be added to a security group or team which is a member of an existing group.

Membership and Permission Management at a glance

Below is a infographic which helps to visualise the relationship between the built-in groups and corresponding permissions. 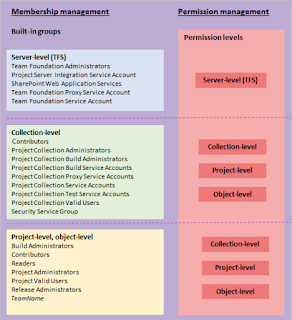 There is a fair bit to comprehend with Azure DevOps authorisation as it inherits much from TFS. Hopefully the areas covered in this article will get you up to speed as soon as possible by highlighting the touch points you will need to be aware of.

Also bear in mind there are a number of ways to skin a solution to your organisational needs. Once defined, it is important to remain consistent to keep a high degree of clarity.

During investigation, within a sandbox environment, the creation of AAD groups and MSA users with a specific goal in mind helped. I would encourage you to do the same and learn from doing across Repos, Builds and Release Pipelines.