Debugging .Net Components called from Python, being run from a Batch Script, executed by the Windows Task Scheduler (Part 2) 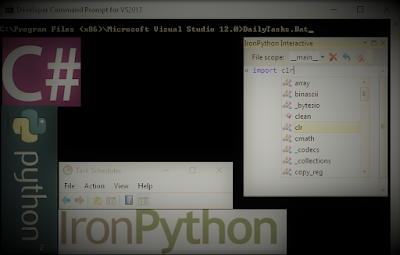 In Part 1 We identified the problem i was recently asked to investigate and looked at getting some output from the batch script being run by the Windows Task Scheduler. As this was a production environment, there was little that could be modified and remote debugging wasn't an option.

In this part 2 post, we will continue to fault find touching on the Python and .Net components i mentioned previously and get to the point where the problem is fully identified and subsequently fixed without any changes made to the production code.

Having started to receive output, the next step was to make some sense of it.


PsExec is a light-weight telnet-replacement that lets you execute processes on other systems, complete with full interactivity for console applications, without having to manually install client software.

Last but not least and probably the less intrusive way of testing SQL connectivity is by use of Universal Data Link files (.UDL).  This method does not require the installation of a telnet client or has as many steps as the “System DSN” method and support for this method is built into every windows version.  You can delete the file afterwards to “clean-up” the system.  Right-click anywhere on your desktop and select “New”, then “Text Document”.
Also checkout some other musings via my blazor.net and azure blog here carlrandall.net

Feel free to contact me via my site AssemblySoft to discuss any ways i can help with your next project...