I was contacted recently with an interesting problem that had arisen for a client where a batch script was not working as expected and silently failing in a production environment. It was being run by the Windows Task Scheduler which was reporting a '1' return code from the Task:Action history. As the script was configured to run silently there was no easy way to see what was going wrong. The Event Log did not contain anything useful and unfortunately, the batch script didn't contain any logging statements. There was also a strong desire not to install any remote tooling or alter the code as it had been working previously and was currently servicing.

I thought i would share the steps taken to identify and fix the issue as it is not uncommon to be faced with a black box, which seemingly doesn't offer much at first glance, but with a little investigation, the lights can soon be turned back on.

After some investigation it became clear that apart from 'always getting given the fun stuff' the batch script was calling python scripts, via the python runtime, which in turn called out to .Net components via Iron Python.

The basic setup of the scheduler with the task running the scripts can be seen in the screenshot below. 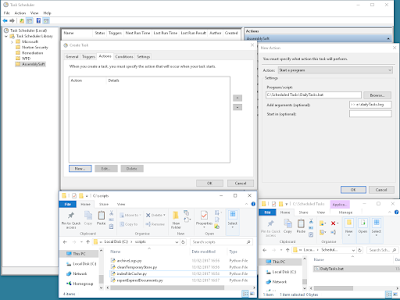 Something in the stack was failing but it was unclear what.

The first thing i proceeded to do was make a backup of the existing task by performing an export. This ensured we had all the properties and settings stored and provided a way back should it be required. I then used the exported properties to create a new task, essentially a copy that could be used to debug. Every care would now be required to ensure that any additions were on a read-only basis in terms of affecting flow and data. After disabling the failing task it was time to get some output from the script by adding some Echo statements.
The Task Scheduler provides an 'Add Arguments' text box where i attempted to pipe the output to a text file using > c:\logs\dailyTasks.log

This gave me an initial win where i could see my newly entered echo statements from the batch file but no actual errors.

After some digging, i added 2>&1 to the end of the argument list and voila, an error appeared in my log. Unfortunately, the error was still rather cryptic and not very meaningful.

I also added double-pipe (>>) to 'append' rather than 'overwrite' which proved to be useful to see progress.

So the arguments to the batch file now looked as follows:
>> c:\logs\dailyTasks.log 2>&1

For those in a more traditional setup, this article will hopefully add a little help to getting the actual errors being reported from a batch script, being run and managed by the Windows  Task Scheduler. This journey still has a way to go and for those interested in the Python and .Net integration, please read on in Part 2.


Feel free to contact me via my site AssemblySoft to discuss any ways i can help with your next project or checkout some other musings via my blazor.net and azure blog here carlrandall.net